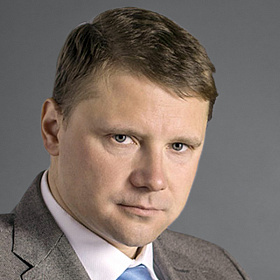 From 2009 to 2013, he worked for SIBUR Group, including as head of SIBUR International, the group’s export division.

From 2008 to 2009, he served as Financial Director at Skolkovo School of Management, Moscow.

Graduate of the Faculty of Economics, Lomonosov Moscow State University. Holds a PhD in Economics.

... elektromašīnbūves rūpnīca, part of Transmashholding). The plant is going to use NLMK steel to manufacture traction electric motors. AS RER make traction motors and electric equipment for electric locomotives, passenger trains, trams and electric lift trucks. Ilya Guschin, NLMK Vice President, Sales, said: “9 out of 10 electric locomotives in Russia are made with NLMK steel, and we are excited to start a new partnership in the field of railway transport. The high quality of our products will help our customers ...

... solution goes beyond analyzing the supply cycle and changes in stocks, incorporating numerous other factors, such as demand and lead time variability. The new digital solution is based on the DDMRP model (Demand driven material requirements planning). Ilya Guschin, NLMK Group Vice President, Sales, said: “As production becomes increasingly local, smart stock planning emerges as a key success factor. Our new digital solution enables us to ensure timely delivery to our customers while minimizing our stock ...

... annum. NLMK steel will be used to make wound rotor induction generators, with a capacity of 3.5 MW each. The use of NLMK NGO steel with low magnetic properties will enable a 10-15% increase in the energy efficiency of Ruselprom’s electrical machinery. Ilya Guschin, NLMK Group Vice President, Sales, said: “NLMK Group and Ruselprom have a long-standing partnership, which stretches back for more than 20 years. The high quality of our steel delivers additional competitive advantages for our client, fueling ...