NLMK Group, an international steelmaking company, spent over 5.7 billion rubles on environmental projects and initiatives in 2017.

Whilst steel output grew by 2% yoy in 2017, specific emissions at NLMK Group’s Russian companies decreased by 1.5% to 20.5 kg per tonne of steel, water consumption decreased by 8%, and the recycling rate* was 86.9%.

The majority of investments in 2017 went towards projects and initiatives to improve air quality. For instance, NLMK Lipetsk upgraded gas cleaning systems at six sections at the refractory, sintering and blast furnace shops. NLMK Group's other facilities executed projects aimed at reclamation of former landfill sites, construction of sewage treatment plants and noise pollution reduction initiatives, among others.

“Leadership in sustainable development was one of our key Strategy 2017 goals. Investment in environmental projects and initiatives over the past five years totalled approximately 29 billion rubles. As a result, we were able to cut our specific emissions by 6%, to decrease our specific water consumption by 16%, and to decrease waste production by 15%, whilst increasing steel output by 11%. Our goal is to minimize our environmental footprint. And we will continue to implement the best available technologies.”

In 2017, NLMK Group ramped up steel production at its Russian companies by 2%, whilst reaching an all-time low level of specific air emissions of 20.5 kg per tonne of steel, making another step towards the level of best available technology (currently stands at 18.9 kg per tonne of steel). 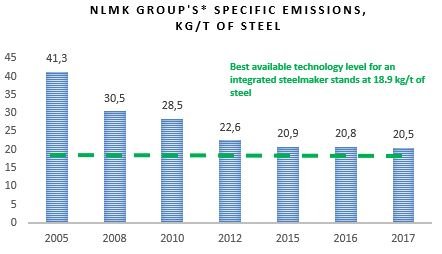 NLMK Group’s large sites (NLMK Lipetsk, Altai-Koks, VIZ-Steel, NLMK Kaluga, Stoilensky) employ state-of-the-art closed loop supply systems for their process water. These systems delivered an 8% reduction in specific water consumption to 5.3 m?/t in 2017; this figure has been brought down by 59% over the past decade.

The share of circulated water that is purified after use before being returned back into production in the Group’s total water consumption has been at a high level of 97% over the last three years.

NLMK Group’s waste generation over the past year has dropped by 4.7%. The average steelmaking waste recycling rate at NLMK’s Russian companies (without Stoilensky) was 86.9%. 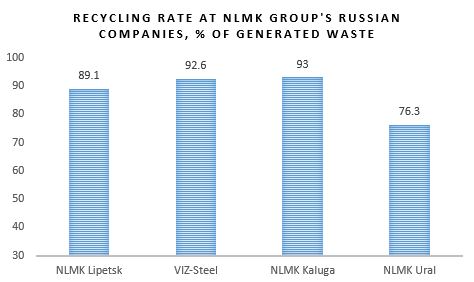 In 2017, NLMK launched its ‘Steel Tree’ initiative aimed at engaging the local communities in the regions where it operates into addressing important environmental issues. 12 environmental, educational and social projects were executed in the Lipetsk regions with the support of NLMK’s ‘Miloserdiye’ charity fund. 4000 volunteers participated in these initiatives, cleaning up over 20 ha, collecting over 300 m? of waste, and planting around 400 trees and bushes.

NLMK Group’s environmental achievements in 2017 were recognized by multiple awards. NLMK was nominated for the ‘Development Award’ for best environmental and ‘green tech’ project for its noise pollution reduction initiatives. A team made up of specialists from NLMK, NLMK Engineering and Ecotech received a gold medal at the Metal-Expo exhibition for the development and execution of an integrated dust emission control project at the Lipetsk site.

NLMK Lipetsk and VIZ-Steel were recognized at the ‘100 Best Companies in Russia. Ecology and. Environmental Management’ national competition.  NLMK Kaluga came first in the ‘Eco-organization 2017’ competition in the ‘Implementation of the most efficient environmental and resource-saving technologies’ nomination, and was awarded a letter of appreciation from the Ministry of Natural Resources and the Environment of the Kaluga region.

NLMK has the most competitive cash cost among global manufacturers and one of the highest profitability levels in the industry. In 2017, the Company generated $10.065 billion in revenue and $2.655 billion in EBITDA. As of 31 December 2017, Net debt/EBITDA stood at 0.35х. The company has investment grade credit ratings from S&P, Moody’s and Fitch.

NLMK’s ordinary shares with a 16% free-float are traded on the Moscow Stock Exchange (ticker "NLMK") and its global depositary shares are traded on the London Stock Exchange (ticker "NLMK:LI"). The share capital of the Company is divided into 5,993,227,240 shares with a par value of RUB1. For more details on NLMK shareholder capital, please follow the link.

Join us in social media